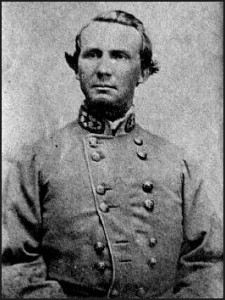 States Rights Gist was born Sept 3, 1831, into a prominent Southern family whose early ancestors settled America in the 1680s.  They were related by marriage to the Lord Protector Oliver Cromwell and Christopher Gist, who was a well known frontiersman and friends with George Washington.  He was also related to the Revolutionary War hero General Mordecai Gist.  A cousin and half Cherokee girl had a child that would be known as George Gist and later as Sequoya, the inventor of the Cherokee alphabet.  States Rights Gist was the seventh son of Nathaniel and Elizabeth Gist.  His father was a wealthy, large land holder, slave owner and strong supporter of state rights.  His family was involved heavily in both local and state politics.  As a young man he was educated at the Mount Zion Academy in Winnsboro, South Carolina, near his father’s plantation home, and later at South Carolina College.  He spent a year at Harvard Law School and later practiced law in addition to joining the South Carolina Militia.  He was well liked and rose through the ranks to state adjutant general and inspector general.  At the beginning of the Civil War Gist continued to serve his state and was involved in organizing and helping mold the South Carolina Militia into a true fighting force.  He weathered the rough seas of local and state militia politics, and in March of 1862 Gist was appointed by Confederate President Jefferson Davis as a brigadier general in the Confederate Army.  He served in a number of positions until being appointed a brigade commander in July of 1863.  General Gist was reported to be a brave man of great principles and from all accounts an able commander who was liked by the men who served under him.  Though not a graduate of any military institution or academy he had a fine grasp of military tactics and discipline.  He led his brigade composed of the 8th Georgia Battalion, 24th South Carolina, 46th Georgia Regiment, 16th South Carolina and Captain T. B. Ferguson’s battery of field artillery from 1863 to 1864.  He was wounded on July 22, 1864, during the Siege of Atlanta but recovered and returned to the brigade a month later.  He also briefly commanded William H.T. Walker’s division which was broken up after the Battle of Atlanta and the brigade was assigned to General Frank Cheatham’s division.  By the late fall of 1864 the unit was all but decimated by months of brutal combat and was combined with the remnants of several other units.  He was killed leading his brigade during a charge on the field at Franklin during Hood’s desperate attack on the city in November of 1864.  It was reported that Gist’s brigade crossed a small creek and hesitated at a wall before braking into a charge.  They came under very heavy artillery and rifle fire from two Union brigades as they advanced forward.  General Gist’s horse was wounded and Gist dismounted.  He led his men forward and was shot several times.  He was carried from the battle to a field hospital and died later that evening.  General Hood’s actions at Franklin, Tennessee, resulted in the loss of much of Gists’s command and had cost the South around 7,000 casualties.  Including General Gist the Battle of Franklin cost the Confederacy 12 general officers with 6 of them being killed or mortally wounded.  The remainder of the unit fought at Nashville, Tennessee, and the end was swiftly approaching for the Southern Cause. I highly recommend the reader to the book by Brian Cisco on General Gist and his family, “States Rights Gist” published in 1991.  It makes great reading for anyone having a serious interest in the Civil War and Georgia units.

General Gist is buried in the cemetery of the Trinity Episcopal Church in Columbia, South Carolina.