The Moss Family & and 8th Georgia 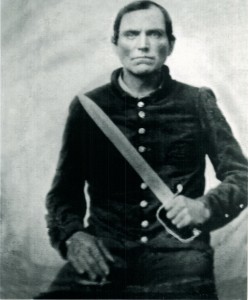 Gilbert Moss (Jan. 13, 1821-Oct. 11, 1862) enlisted with the unit in 1861.  Family legend has it he was a drummer boy in a militia unit during the Indian uprisings in the late 1830s as a teenager.  During this service he perhaps encountered a young United States Army officer named William H. T. Walker, who later during the Civil War would go on to command the division under which the 8th Georgia served as a part of Gist Brigade some 20 years later during the Civil War.  Gilbert Moss was married to Francis “Fannie” Moss, who was a very distant cousin.  Gilbert was a relative of Joseph Moss and an earlier family member also named Gilbert Moss, who both served  in the American Revolution.  His wife, Fannie Moss, survived him and later settled in Arkansas with the rest of her family in 1867. Company records indicate Gilbert Moss died in Savannah in the fall of 1861 without seeing combat.  His brother Christopher Columbus Moss was reported to have had a deformed hand and though he did not serve in the Army he wrangled horses for the Confederacy during the Ccivil War.   According to 8th Georgia records Gilbert Moss died of a fever and was buried in Savannah.  He would have been 41 at the time of  his passing and certainly at an advanced age for a private.  Family legend has it that they later retrieved his body in a wagon and buried him near his home. 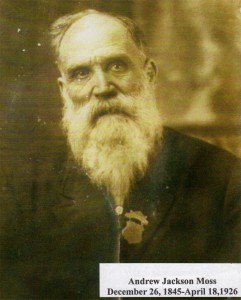 Andrew Jackson Moss (Dec. 26, 1842 -April 18, 1926)   Andrew Jackson Moss is the son of Gilbert Moss.  There are no period Civil War photos of my Great Great Grandfather. However there are a number of photos taken of him and the family later in life.  In many of these he is wearing Civil War  reunion medals and he was presented the Southern Cross of  Honor in June of 1903 by the Russellville, Arkansas, Chapter of  the United Daughters of the Confederacy.  The medal is on display at the Arkansas MacArthur Military History Museum along with several of his reunion items.  He drew a Civil War pension from the state of Arkansas beginning in 1915 and on his pension record is noted his “knee wound”, received  July 22, 1864, at Atlanta.  After settling in Arkansas in 1867, he became a greatly loved and well respected member of the Yell County, Arkansas, farming community.  He passed away in 1926 at the age of 88 after being gored in the shoulder by a bull on his farm.  According to family stories told to me by Great Great Grandmother Dale Moss and her sister Audra Carter Moss, he made several attempts to run away from home and join the unit after the death of his father.  After his second attempt his mother, Fannie Moss, relented and allowed him to serve.  At the conclusion of the war he was reported to have walked home after retrieving his short pig sticker (knife), his powder horn and his musket.  My grandmother and great aunt were both born in the late 1800s and the very early 1900s, and grew up hearing his personal stories of the war.   They lived on the adjoining farm and were in contact with their grandfather and grandmother Mary Katherine Peeler Moss much of the time.  As a young man growing up in the 1950s, I remember them telling me stories that he had related to them about being so hungry during the Civil War  they ate the dead artillery horses and made coffee from acorns.  They told me that he would always stand up and dance a little jig each time “Dixie” was played.  He attended a number of Confederate reunions and returned to Georgia to visit  extended family on many occasions.  He named his second son William Walker Moss after one of his Civil War commanders, General William H.T. Walker.  The family is in possession of his double barrel muzzle loading shot gun, short pig sticker (knife), and a number of his reunion items.  We were told as children that this was actually the gun and knife he carried during the war. The gun was made in the late 1850s by a  local gunsmith named H.R. Thompson in Jackson, Michigan.  Jackson was a training center for most of the Michigan units headed South during the Civil War.   As the war started the South had few firearms manufacturing facilities and many of those who enlisted brought their own hunting rifles and shotguns. It is a well made and it is certainly possible he carried it during the war.  It is also possible he picked it up on some battlefield or scrounged it during the final days of the conflict from a soldier of a Michigan unit who they were engaged against.  This is course speculation on my part.   It is more of a hunting shotgun and truly not suited to combat.  It was an expensive gun for its time and as a dirt farmer and hungry Confederate private  I am not sure he could  have afforded such a fine piece.  However, in the  final days of the Confederacy soldiers also armed themselves with anything available.  There is a picture of the gun in the photo section of this site.  He enlisted for 3 years on August 23, 1863, and unit records indicate he was wounded July, 22, 1864, during the Atlanta Campaign, which was the same day General Gist received a wound that put him out of action for over a month.  Andrew Jackson’s name last appears on a unit roster in the fall of 1864.  He is listed on the Muster Roll of Company H in defense of Macon, Georgia.  His pension records indicate he fought “to the end in May of 1865,”  and he was awarded a Confederate pension through the State of Arkansas in July of 1915, some 9 years before his death in 1926.  He had seen some of the most bloody and desperate fighting of the war.  The campaigns at Chickamauga, Chattanooga, Atlanta, Nashville and Franklin were all some of the most desperate fights of the conflict, and Gist Brigade acquitted itself in good order. They never broke or ran, and the courage of these men under such fire and terrible conditions is to be admired.  Andrew Jackson Moss died in April of 1926 and left a large and loving family of prosperous farmers near Plainview, Arkansas, in Yell County.  He is buried beside his wife, Mary Katherine Peeler, at New Bethel Cemetery near Plainview, Arkansas.  The family owned and farmed a large number of acres until losing much of the land to the banks during the Depression of the 1930s.  Photos of Andrew Jackson Moss and various  reunion items are posted in the photo archive of this web site.

Other members of the Moss family who joined the unit  at the beginning of the Civil War were: James Moss, Hiram Moss, Johnson Moss and Lewis Moss.  Additional research is currently being done on these individuals and it will be posted to the web site later. 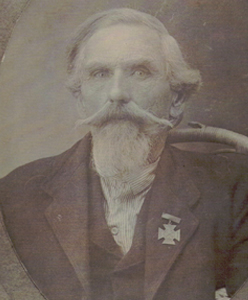 Ephraim Moss Ephraim Moss Jr. was born June 11, 1838, in York County, SC. He died Dec. 9, 1927, in Ranger, Gordon County, GA. He married Julia Chastain in 1972. He is the youngest son of Ephraim Moss, Senior and Nancy Gaston Knox Moss. They are buried at Bethesda Baptist Cemetery. He is the brother of Gilbert Moss. He served with Company E and, according to his pension records, he was wounded at the battle of Kennesaw Mountain. He enlisted October 18, 1861, and fought for the duration of the war. He was pardoned April 28th, 1965, in Greensboro, North Carolina. He was awarded the Southern Cross of Honor by the DC of Gordon County chapter 293 and was awarded a veteran’s pension Feb. 7, 1898. James Moss testified as to the wound.