Another great print added to the photo gallery thanks to wikipedia.

The Battle of Missionary Ridge was fought November 25, 1863, as part of the Chattanooga Campaign of the American Civil War. Following the Union victory in the Battle of Lookout Mountain on November 24, Union forces under Maj. Gen. Ulysses S. Grant assaulted Missionary Ridge and defeated the ConfederateArmy of Tennessee, commanded by Gen. Braxton Bragg. 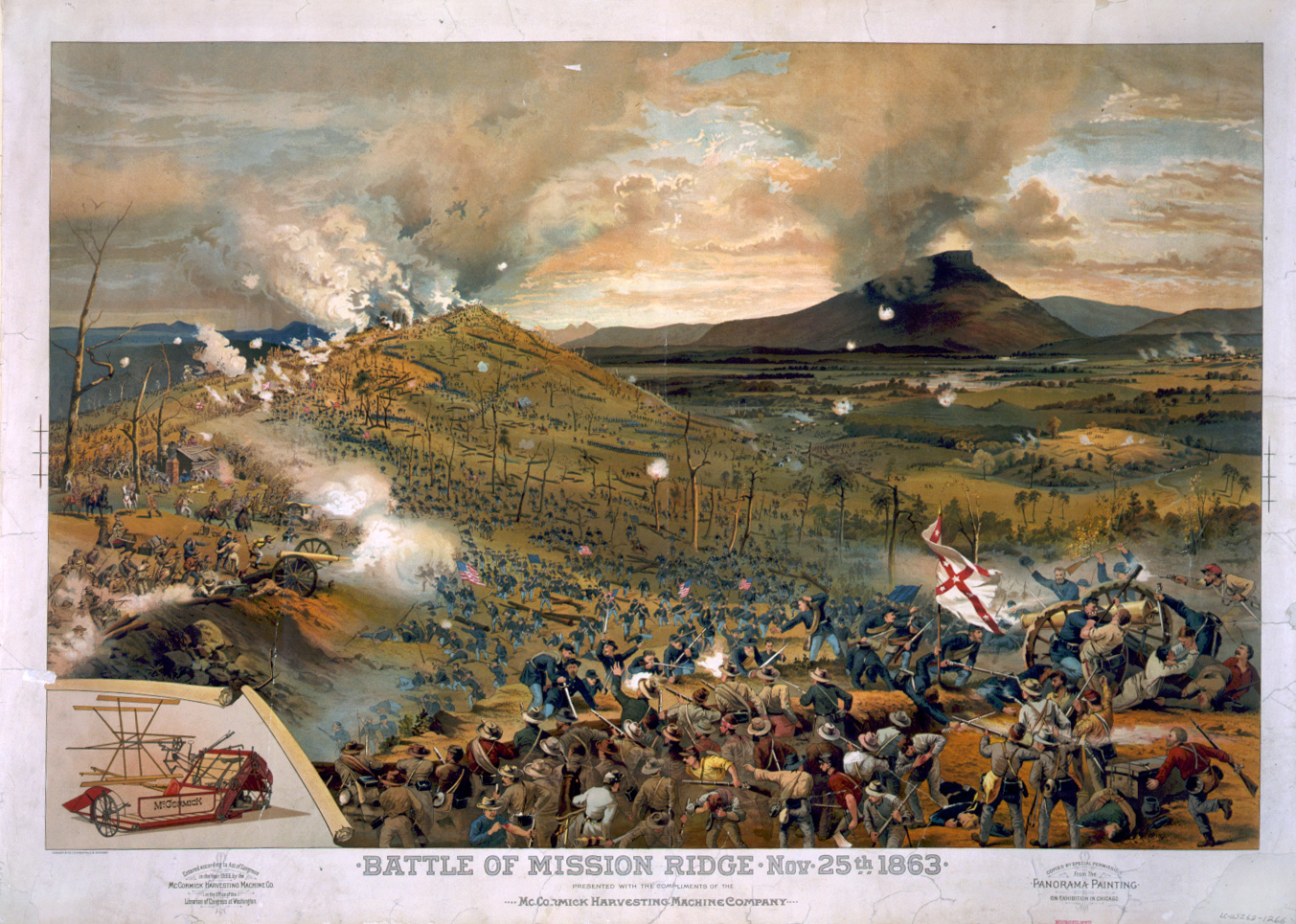 The Battle of Missionary Ridge

You got to love the Internet. While doing some family research I found images of the graves of my GGG Grandfather Ephraim Moss and my GGGrandfather Gilbert Moss located in Calhoun Georgia. I never knew where they were buried.

Gilbert Moss the father of Andrew Jackson Moss is buried at Bethesda Baptist Church, 146 Bethesda Church Road in Calhoun, Georgia. He is about 30 feet inside and 15 feet to the right upon entering the cemetery. Gilbert Moss  was serving with the 8th GA ( Gist Brigade) near Savannah when he died of fever.

You can find it here. Bethesda Baptist Church, 146 Bethesda Church Road in Calhoun

Found some interesting new information on the 8th Georgia, courtesy of ancestry.com

Charles Lee Shamblin was born in Nov 8th, 1875 in Kingston GA. He moved to Floyd County , GA the next year.
Brother Hamilton died of dysentery. Brothers were together until Hamilton died.

Henry was with Company F, 8th Georgia Battalion, Gist’s Brigade. I believe he enlisted with the CSA in Calhoun GA on Oct 18th, 1861. Fought in Battle of Chickamauga.
Henry was Henry H. Shamblin…. he was the H. H. Shamblen listed and was misspelled.

8th Infantry Battalion was organized with six companies during the early spring of 1862 at Savannah, Georgia. Some of the men were from Adairsville and Thornburgh, and Gordon County. For a time the unit served in the Department of South Carolina, Georgia, and Florida, then it was assigned to Gist’s Brigade, Army of Tennessee. After the operations in North Mississippi, it fought with the army from Chickamauga to Nashville and ended the war in North Carolina. This battalion contained 232 men and 183 arms in December, 1863, and was included in the surrender on April 26, 1865. The field officers were Lieutenant Colonels Asahel Littlefield, Leroy Napier, Jr., J.T. Reid, and Zachariah L. Watters; and Majors John W. Gray, B.F. Hunt, and Edward F. Morgan.
They were on duty at Charleston, S.C. and the Georgia coast, until May 1863, when they were sent as a part of Gist’s brigade, from South Carolina, to the reinforcement of General Joseph Johnston at Jackson, Mississippi. They were in battle at Jackson in May and July and participated in the march to the Big Black River, via Yazoo City, for the relief of Vicksburg.
After the evacuation of Jackson, they were transferred to the army of Tennessee in time to take part in the battle of Chickamaugh. Adjutant Gray participated in the two days conflict and in the siege of Chattanooga and the battle of Missionary Ridge, the Atlanta campaign, including the battles of Rocky Face, Resaca, New Hope Church, Kenesaw Mountain, Peachtree Creek, Atlanta (July 22nd), Jonesboro, and the winter campaign in Tennessee, made memorable by the terrible experiences of the army at Franklin and Nashville and on the retreat.